A Taste of Canada ~ Shreddies 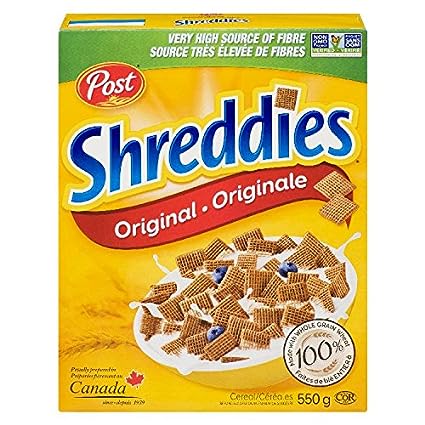 Made proudly in Niagara Falls, Ontario, Shreddies is a Canadian tradition that has been passed down through generations.

The 100% whole grain squares that we know today as Shreddies were actually introduced in 1939, but some people may be surprised to know that they weren’t originally called “Shreddies”. In fact, the cereal Canadians have come to love was originally called “Cubs” and only changed to “Shreddies” in 1941. Amid growing popularity, the Niagara Falls plant initiated a building expansion to allow for a second Shreddies production line in 1977. Today, Shreddies is available in Original, Banana Bread, and Honey flavour varieties.
From https://www.postconsumerbrands.ca/brand/shreddies/

I love Shreddies.  They are great served with cold milk . . . but even better served withhot milk especially this time of year.
at December 26, 2019

Email ThisBlogThis!Share to TwitterShare to FacebookShare to Pinterest
Labels: A Taste of Canada, product review