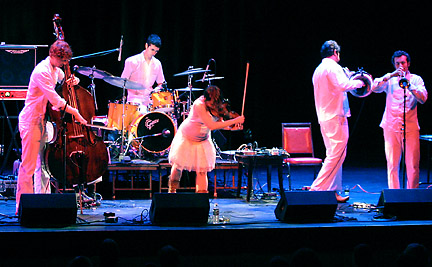 In late 2003, they recorded their first album, at the same time and in the same studio that Arcade Fire recorded Funeral. However, Arcade Fire's popularity was just beginning to break when they asked Bell Orchestre to tour with them in the fall of 2005, delaying the release of their album. Regarding finishing the album, Bell Orchestre said: "We regrouped and we did this residency at an arts center in Canada in the mountains. We actually finished [the record] there, we did a few overdubs and went home and sequenced it and mastered it."

Recording a Tape the Colour of the Light was finally released in 2005. In March 2006, Bell Orchestre launched a tour of Europe and the US to promote the album.

The band released a follow up to Recording a Tape the Colour of the Light, entitled As Seen Through Windows with Arts & Crafts Records on March 10, 2009. It was recorded in Soma Electric Studios in Chicago, Illinois. The album since won a Juno Award for best instrumental album.

On October 20 2020 the band released a new single "IX: Nature That's It That's All." along with its music video. On the same day they announced on their website that they had signed to the British indie record label Erased Tapes. (from Wikipedia)