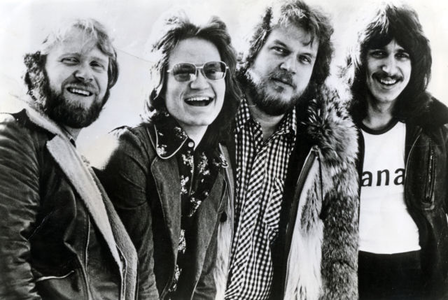 Bachman–Turner Overdrive, often abbreviated as BTO, were a Canadian rock band from Winnipeg, Manitoba founded by Randy Bachman, Robbie Bachman and Fred Turner. Their 1970s catalogue included five Top 40 albums and six US Top 40 singles (eleven in Canada). BTO has five certified Gold albums and one certified Platinum album in the US; in Canada, they have six certified Platinum albums and one certified Gold album. The band has sold nearly 30 million albums worldwide, and has fans affectionately known as "gearheads" (derived from the band's gear-shaped logo). Many of their songs, including "Let It Ride", "You Ain't Seen Nothing Yet", "Takin' Care of Business", "Hey You", and "Roll on Down the Highway", still receive play on classic-rock stations.

The original lineup consisted of Randy Bachman (lead guitar, lead vocals), Fred Turner (bass guitar, lead vocals), Tim Bachman (guitar, vocals) and Robbie Bachman (drums). This lineup released two albums in 1973. The second and most commercially successful lineup featured Blair Thornton (lead guitar), in place of Tim Bachman. This lineup released four albums between 1974 and 1977, including two that reached the Top 5 in the U.S. pop charts, as well as the band's only U.S. No. 1 single ("You Ain't Seen Nothing Yet"). Subsequent lineups enjoyed only moderate success.

After the band went into a hiatus in 2005, Randy Bachman and Fred Turner reunited in 2009 to tour and collaborate on a new album. In 2010, they played the halftime show at the Grey Cup in Edmonton. The two stopped touring following Turner's amicable retirement in March 2018.

On March 29, 2014, the classic Not Fragile line-up reunited for the first time since 1991 to mark Bachman–Turner Overdrive's induction into the Canadian Music Hall of Fame, and participated in performing in a tribute version of "Takin' Care of Business". (from Wikipedia)