A Taste of Canada ~ Bannock 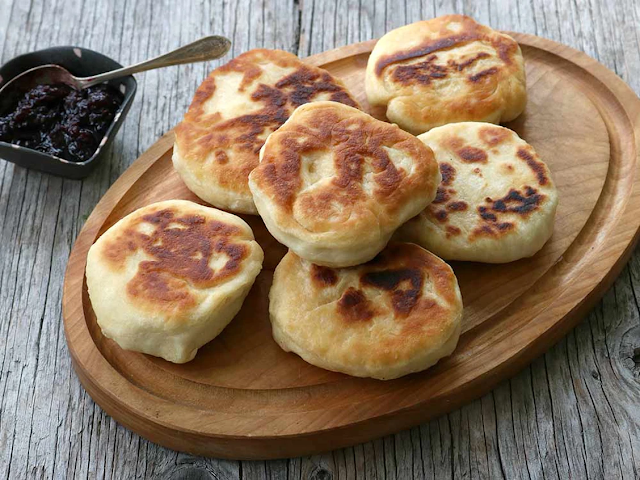 Bannock is a type of fry bread, which originates from Scotland but was eventually adopted by the Indigenous peoples of Canada, particularly the Métis of western Canada. It is a simple bread, but quick to make and useful for travelling and while in the wilderness.  (Google)

However, the story isn’t so straightforward. It is now understood that many Indigenous communities had their own pre-colonial versions of bannock. Indigenous peoples in Canada were consuming unleavened bread-like foods from the starch or flour of bracken rhizomes (the underground stems of ferns), which were cooked or baked on rocks over fire, in sand, or in cooking pits or earth ovens. For example, camas bulbs (an herb from the lily family) would have been baked for long periods of time, dried, and then flattened or chopped, and formed into cakes and loaves. First Nations cooked their bannock by a variety of methods. Some rolled the dough in sand then pit-cooked it, brushing the sand off once it was ready to eat. Others baked it in clay or rock ovens. Also, some wrapped the dough around green, hardwood sticks, resting slanted over an open fire. Bannock also grew out of necessity. As Indigenous peoples were removed from their land, and thus their traditional sources of food, the Canadian government supplied them with rations of things such as flour, lard, sugar and eggs. Once a quick and easy meal to be made in the bush, bannock became a necessity to prevent starvation on reserves. https://www.thecanadianencyclopedia.ca/en/article/bannock

Here is a great recipe for Bannock by Shantel Tallow, the self-described “food mind” of Aahksoyo’p Indigenous Comfort Food, a catering business she owns with her partner (in business and in life) Paul Conley.

The most common way to cook bannock is in a skillet on the stove top or over an open fire. But Tallow’s grandfather, Louis, baked his, flipping the whole thing halfway through so that it was evenly golden and crisp.

In a large bowl, stir together the flour, baking powder and salt.

For baked bannock: Make a well in the middle of the flour mixture and pour in the water, then stir just until combined.

Spread the dough into a greased or parchment-lined 9×13-inch pan and drop three dollops of lard (or butter) onto the top of the batter. Bake in a preheated 400˚F oven for 20-25 minutes, turning once to brown the other side.

For stovetop bannock: Gradually add enough water to moisten the ingredients and bring the mixture together in a ball. Turn the dough out onto a lightly floured surface and gently knead about 10 times.

Shape the dough into round patties about ½-inch thick. Cook on an oiled skillet for 3-4 minutes per side, until golden brown.

Email ThisBlogThis!Share to TwitterShare to FacebookShare to Pinterest
Labels: A Taste of Canada, bread