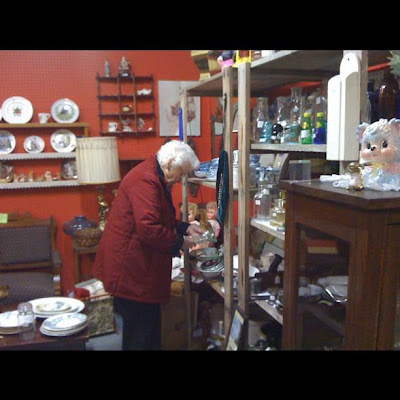 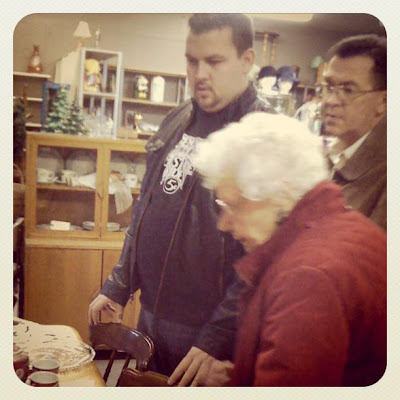 My Nanna was turning 95 on January 2nd and we thought tea and shopping at the Mad Hatter Tea Room was the perfect gift idea for the lady who has everything. "We" refers to my husband, youngest son & girlfriend and myself. We refused to tell her where we were taking her but she seemed pleased when we pulled into the Orwell area business. Above are a couple of photos taken at this event.


We all ordered pots of tea and scones from a nice young lad who was running the tea room single-handed. Service was slow but not awful. Tim, Krystel and Hal wanted sandwiches but despite what the menu said, the only sandwich available was roast beef and cheese . . . so that's what they ordered. Hal didn't tell me until later that the bread was dry. The tea was lovely and hot and our server came back with hot water and refilled the pots when we emptied them. The scones were fresh and warm. We had a fairly lovely time. And Nanna had a great time wandering through all the collectibles and antiques for a couple of hours.

So I recommended the tea room to my Mom and she went there for lunch with friends. Her comments were similar to mine . . . quaint, slow service and nothing spectacular but still nice and enjoyable.

Groupon came out with an amazing coupon for 71% off the price of the Royal High Tea for 4 (value $120.00. You must see the photo used to advertise the coupon!!!! Doesn't it look fabulous? 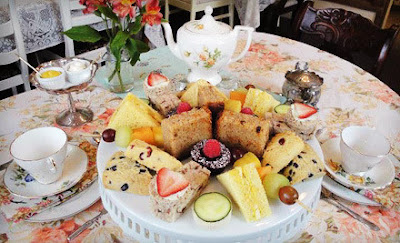 And according to the offer the Royal high tea service includes the following:
Glass of non-alcoholic bubbly cider
Two home-baked currant scones
Devonshire clotted cream imported from England
Various finger sandwiches
Belgian chocolates
Choice of home-baked desserts and cakes (one per person)
Choice of specialty loose-leaf teas (one per person)

We arrived at the tea room about 1:20 pm and were seated at a huge table with a ratty old un-ironed tablecloth that was too small for the table. That in itself was enough to drive Sandy and Nanna both a little nuts. Shortly after our server arrived to take our tea order. A while later she came back with menus so we could select our sandwiches. I would have preferred just having a selection and not individual orders . . . but that was the least of our problems. Have you noticed that we still haven't received our tea yet. All we had in front of us were 4 chipped little dessert plates and a pile of 3 napkins. Mom ripped her napkin in half and shared with me.

This photo was taken at 1:51 pm (31 minutes after our arrival). We still have no tea or anything else. 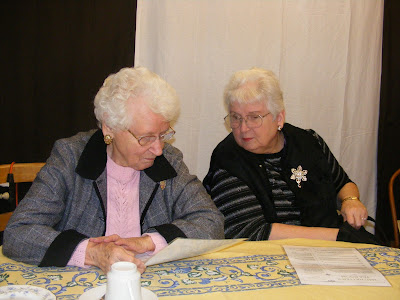 Finally our tea arrived and was soon followed by a 3-tier server with our 12 "sandwiches" and 4 (not 8) scones as well as 2 dishes of jam and one of Devonshire clotted cream imported from England. The sandwiches were thin slices of baguette with a teaspoon of filling on top. They looked awful, the bread was dry and crunchy, the filling fell off when we tried to eat them and there was no butter or margarine on them. We each got 3 of these tiny "finger sandwiches" which equals 3-6 bites total. To avoid total starvation we each grabbed a scone, quickly coated them with cream and jam, and they were lovely and warm. At this time we asked for napkins.

When our server returned I politely asked if we weren't entitled to a little more food since each serving was supposed to have a $30 value. We were entitled to 4 more scones she said, but they were out and it would take at least 20 minutes to make more. And, by the by, we were eating the REAL clotted cream and not the fake stuff. Seriously?!? I can hear you asking why they didn't start baking more when they ran out. I forgot to ask that question. I did ask what we could substitute and she mentioned cheese scones. Well I'd had them on my last visit so I asked her to bring them. I also asked for hot water.

A very long while later the 4 cheese scones arrived and a while later a dish of butter appeared. By then, though, the scones were gone. We were starving. At that point I believe we finally received our 2 ounces of cider. Nanna disappeared shortly after that because she'd had enough of High Tea and much preferred wandering through the store.

Have I mentioned yet that the server frequently reached across us to place things on the table and to pour cider and such. I guess it was easier than actually walking around the table and doing it properly. I can't remember when the napkins arrived but we did receive a pile of napkins at around this point.

I was still trying to be calm which I don't do well when I am the victim of horrible customer service. Sandy said my face turned pink at least twice but I never did lose my temper. At one point I got up with my empty tea pot and headed for the kitchen for some hot water. I was met half way there by my server who promised to bring it to our table quickly. A while later our hot water finally arrived. Soon after that a chipped dinner plate covered in desserts arrived . . . two huge slabs of chocolate cake (definitely not homemade); two pieces of banana pie (freshly made according to the server) but mushy and greyish bananas floating in the filling and topped by undrained maraschino cherries so that red syrup was all over the plate and soaking into the desserts; 1 blueberry tart still in its tin foil liner; and 4 marshmallow and something concoctions which resembled a cookie that Nanna makes but apparently was dried out and hard according to Mom. There was nothing to serve the cakes a pies from the plate like a cake server or something and no fresh dessert plates to put them on and guess what else was missing . . . forks! So we had quite the giggle as we used our knives and tea spoons to slide the cakes over onto our dirty lunch plates.

I threatened Mom that if she left a tip I was going to be very mad at her. Mom did leave a tip though because she is a lady. I guess I'm not so lady-like. So dear servers, please don't take the tip on the table as an indication of our delight in the food or service, its just there because my mother isn't mean enough not to leave one. We never did get our Belgian chocolates.

We enjoyed browsing through the store and then we were off for home. 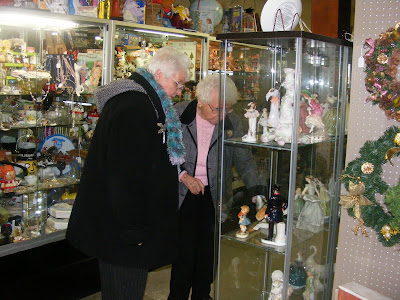