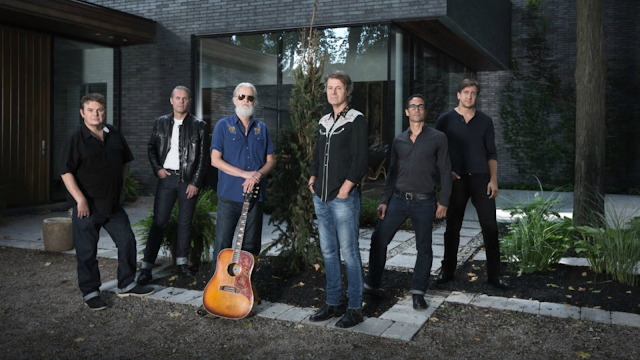 Blue Rodeo is a Canadian country rock band formed in 1984 in Toronto, Ontario. They have released 15 full-length studio albums, four live recordings, one greatest hits album, and two video/DVDs, along with multiple solo albums, side projects, and collaborations.

High school friends Jim Cuddy and Greg Keelor began playing music professionally together after completing university. They put together several bands without commercial success in the late 1970s, releasing a single as Hi-Fi's in 1980.

Cuddy and Keelor moved to New York City in the early 1980s to further their music careers. There they met keyboardist and fellow Canadian Bob Wiseman, who was at that time working as a producer. Upon returning to Toronto in the summer of 1984, the trio decided to form a band. The name "Blue Rodeo" had already been chosen for the new group when they met former David Wilcox drummer Cleave Anderson and asked him to join. Anderson in turn recommended his former bandmate in The Sharks, bassist Bazil Donovan, and the new band's lineup was essentially set.

They have won many Canadian music awards, including twelve Juno Awards and seven SOCAN awards. On June 16, 2009, it was announced that the band would receive a star on Canada's Walk of Fame in Toronto. The induction ceremony was held on September 12, 2009. They are the fifth band to receive the honour. Blue Rodeo was inducted into the Canadian Music Hall of Fame at the 41st Juno Awards on April 1, 2012. In May 2014, the band received a Governor General's Performing Arts Award (GGPAA) for Lifetime Artistic Achievement, Canada's highest honour in the performing arts.