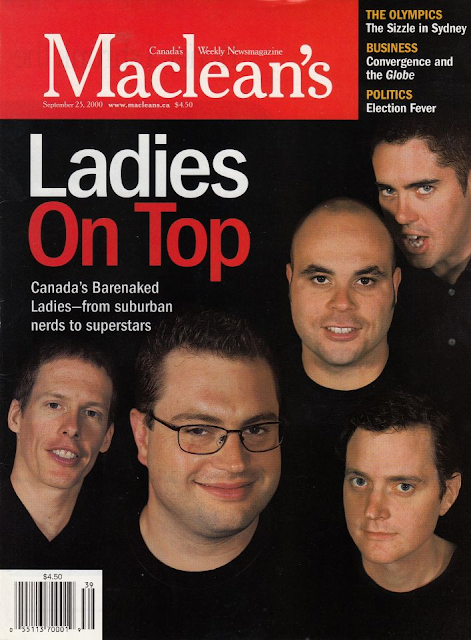 Barenaked Ladies is a Canadian rock band formed in 1988 in Scarborough, Ontario. The band developed a cult following in Canada, with their self-titled 1991 cassette becoming the first independent release to be certified gold in Canada. They reached mainstream success in Canada when their debut with Reprise Records, Gordon, featuring the singles "If I Had $1000000" and "Brian Wilson", was released in 1992. The band's popularity subsequently spread into the U.S., beginning with versions of "Brian Wilson" and "The Old Apartment" off their 1996 live album Rock Spectacle, followed by their 1998 fourth studio album Stunt, which was their breakout success. The album featured their highest-charting hit "One Week", as well as "It's All Been Done". Their fifth album Maroon, featuring the lead single "Pinch Me", also charted highly. In the 2010s, the band became well-known for creating the theme song for the sitcom The Big Bang Theory.

Initially a duo of Ed Robertson and Steven Page, the band quickly grew to a quintet adding brothers Jim and Andy Creeggan and Tyler Stewart by 1990. Andy Creeggan left the band in 1995 and was replaced by Kevin Hearn. Page left in 2009, reducing the group to a quartet.

The band's style has evolved throughout their career, and their music, which began as exclusively acoustic, quickly grew to encompass a mixture of an array of styles including pop, rock, hip hop, rap, etc.[citation needed] The band's live performances feature comedic banter and free-style rapping between songs. They have won multiple Juno Awards and have been nominated for two Grammy Awards. The group has sold over 15 million records, including albums and singles, and were inducted into the Canadian Music Hall of Fame in March 2018.