Book Review ~ Sammy, Where Are You? An Unconventional Memoir . . . Sort Of by Ira Spector 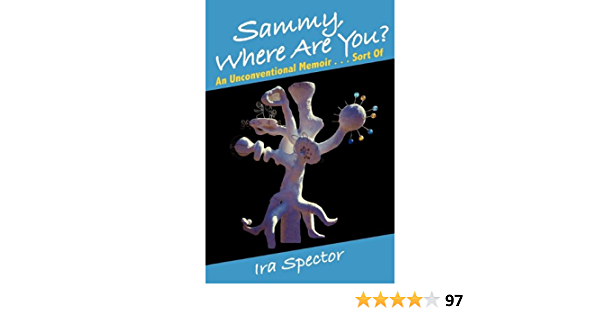 From the back cover of this outrageously funny book:

Author Ira Spector played poker for years with an artificial turkey inseminator, and had after-tennis "prayer meetings" with his pals where they screamed and shouted at each other and solved all the worlds problems in one hour. He was slowly infected with an itch to document the most memorable episodes in the jar of jelly beans that has been his life.
He chronicles his story in seventy-one essays and poems which are frank and at times outrageous. His eventful and unusual romps through six continents and eighty one countries, the diversity of his career and the characters he met are amply described in this rich narrative.
He talks about:
This enticing memoir is a journey through the exciting highs and memorable adventures encountered in one hell of a lifetime.


Ira Spector grew up in Brooklyn and is now retired in the San Diego, California area.  He has met some very interesting characters in his life and traveled to many exciting and exotic locations.   I think his life has definitely been like a jar of jelly beans.  Apparently one day, at the ripe old age (his words, not mine . . . LOL) of 78, he decided to publish some of the more memorable moments in his life. I am so glad he did.

Spector has a really enjoyable writing style and I had trouble putting this book down. In fact, there was more than one occasion when I burst out laughing. Since I read late at night, you can imagine how startled Hal was.  If I had to pick a favourite story it would have to be about the adventures of Sammy.  If you want to know what happened to poor ol' Sammy you will have to buy this book.  The story that made me cry the most was about Spector's visit to a Cambodian prison.

Spector is great at bringing his characters to life, making them dimensional and real to the reader.  His stories show insight into the world and the people in it.   If I could think of criticism it would be the fact that Ira himself often remains enigmatic.

The author has won three honorable mention awards for some of the 66 stories in the memoir, two international contests, and had three stories and one poem published in online publications. His poem, A Senior's Tennis Lament, has been printed in Tennis View magazine.

This is a great read.