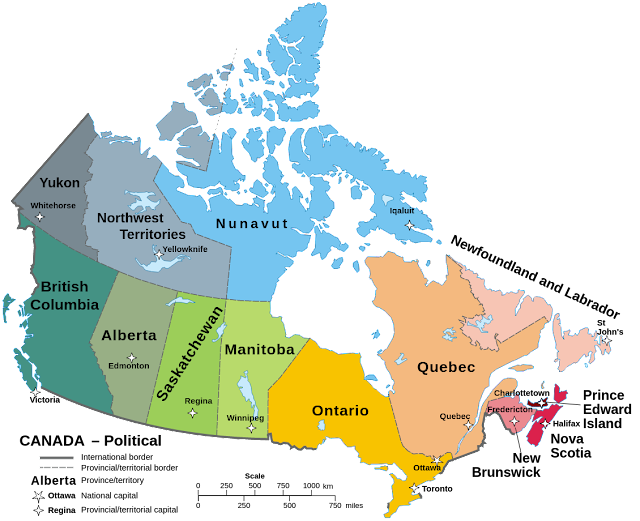 The name “Canada” likely comes from the Huron-Iroquois word “kanata,” meaning “village” or “settlement.” In 1535, two Aboriginal youths told French explorer Jacques Cartier about the route to kanata; they were actually referring to the village of Stadacona, the site of the present-day City of Québec. For lack of another name, Cartier used the word “Canada” to describe not only the village, but the entire area controlled by its chief, Donnacona.

The name was soon applied to a much larger area; maps in 1547 designated everything north of the St. Lawrence River as Canada. Cartier also called the St. Lawrence River the “rivière du Canada,” a name used until the early 1600s. By 1616, although the entire region was known as New France, the area along the great river of Canada and the Gulf of St. Lawrence was still called Canada.

Soon explorers and fur traders opened up territory to the west and to the south, and the area known as Canada grew. In the early 1700s, the name referred to all French lands in what is now the American Midwest and as far south as present-day Louisiana.

Ontario acquired its name from the Iroquois word “kanadario”, which translates into “sparkling” water. The earliest recording of the name Ontario was in 1641 where it was used to describe a mass of land on the north shore of the easternmost part of the Great Lakes. The British settlers had originally called the land that covered Quebec, Ontario, and part of the United States all as Quebec. It wasn’t until the British enacted the Constitutional Act in 1791 that Ontario would be known as the land upstream from the St. Lawrence River, or Upper Canada, and Quebec considered the land downstream from the St. Lawrence River, known as Lower Canada. In 1867, Ontario and Quebec officially became separate provinces.