Sometimes it takes me a long time to finish a project.  Edible Flowers was started sometime in 2013 (I think) and I posted an update on it January 2, 2013 at http://inmyworld-pam.blogspot.ca/2013/01/edible-flowers-update.html 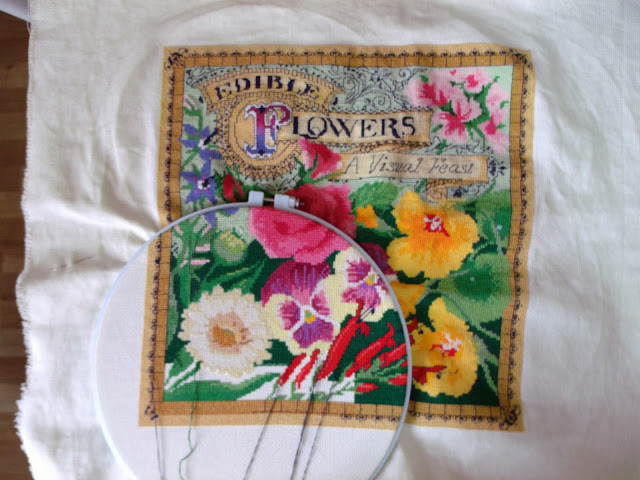 I've run out of DMC #3818 so I'm rather hung up in the corner there.  Lousy weather today so I think it will be a day or two before I get to Michaels for more.  Not to worry.  I have lots more back stitching to do.

Okay, I know for a fact that some people will think this is weird but I have an unusual way of doing counted cross stitch. I work page by page of a chart (which is the normal part . . . I think) but I also work row by row, leaving the threads dangling until they are needed again. Some people think that is kind of weird.  It works for me. What can I say.

The other weird thing about cross stitching, although I don't think it is so weird at all, is that I love back stitching and making French knots. And this project has tons of both.

I hope you are enjoying your day. I just spent 2 hours working on Edible Flowers and watching Rock of Ages.
at January 02, 2014